RTVE, the public television network in Spain, is in charge of the exclusive broadcasting rights of the Olympic Games in the country and needs a complete graphic package for its application in all the programs related to the broadcasting of this event in its different channels: TVE1, TDP and Play RTVE.

The channel launches a public tender in order to determine the agency that will develop the complete graphic package for the broadcast of the TOKYO 2020 Olympic Games.

The main challenge is to present a winning proposal based on elements that reflect dynamism and action in all the pieces to match the spectacular nature of the competition.

My role in this project is to contribute with Visualzink in the creation of the creative content presented to contest by the agency, and collaborate, therefore, to winning it for the agency.

Circles referring to the flag

A series of creative works were presented to the competition, with the only visual reference provided by the client being a few screenshots of the general stage of the Tokyo 2020 Olympic Games program. The creative content maintained the idea of circularity of the set and respected the original colors, but added elements typical of Japanese iconography.

Therefore, we developed a rich visual universe, where the circle takes a leading role in the entire graphic narrative and animation. We opted for flat movements and highlighting the characters or athletes in duotones that fit perfectly in the chromatic proposal of the stages. The ensemble is enriched with textures typical of Japanese compositions.

In terms of color, a graphic palette is created based on the representative colors of the host country: Japan, combined with the corporate colors of RTVE.

For the typographic aspect, we opted for a condensed typeface that highlights the sporty character of the competition combined with a monospaced typeface that provides contrast to the compositions and is ideal for data representation.

An important part of the graphic package are the different headers made for different programs and sections.

The main header sets the tone for the other intros for specific sections.

Here we can see the application of the graphics in the actual program and on set, fully integrated into the environment and the dynamics of television and broadcasting. It’s the finishing touch to a wonderful contest entry. 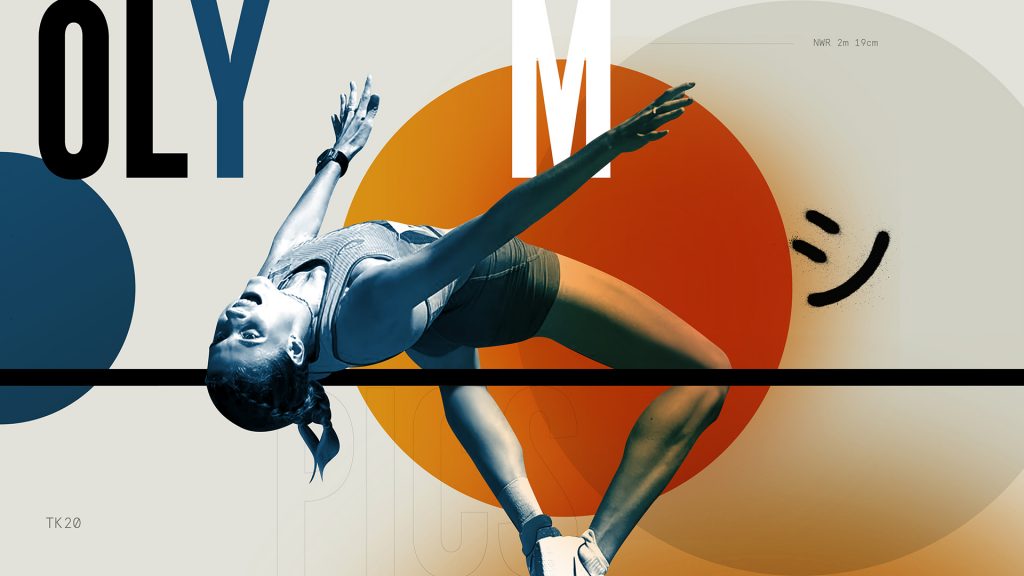 One of the purposes for this project was to create compositions with a palpable aesthetic interest, and with high value from a design point of view.

To create headers in which each frame could be an individual artistic piece, and at the same time adapt to the dynamics and narratives of the media.